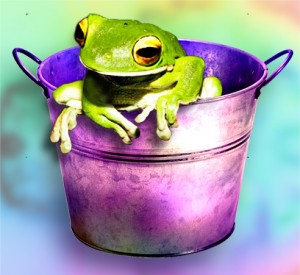 Milking dogs is tougher than it looks, reflected Uncle Bungalow as the delirious canine leapt away through a kitchen window. Just getting the bugger to stand still was hard enough, never mind finding the central udder. They’d got there in the end though. He sighed contentedly and then looked up with a start.

“Great salivating elevators!” he exclaimed at the door as a clunking rang from without. “A fresh bucket of frogs!” Oh glee of all glees! It was time! The anticipation of that lovely, curious sensation from the preparation for this afternoons consultation. Oh such elation at these cogitations – it was nearly as good as bacon!

And so, after carefully depositing the bottle of fresh ooze into his patented cooling toilet, and after a brief discussion on the merits of pork dripping with Lionel the delivery merchant, Uncle Bungalow bounded up the stairs, smushing mallet in one hand, bucket in the other, a merry little ditty under his breath.
“Fa La Lee! Fa La Laa!”

Presently, and most cautiously, the front door slid from clamped to gaping. An anxious shape crept silently o’er the threshold. Eyes a-popping, and squirming with fear, the figure called out in a tremulous female voice.
“Um… he… helloo!” As there was only a muffled slurp in reply, she ventured forth once again. “Um, I say… um… hello.”

“Ah, Senator!” came a bellow from the top of the stairs, causing the woman a mild stroke. “Happy to be back I see!”
A somewhat damp and sticky Uncle Bungalow came lolloping down the floor-to-floor steps towards her. Through tightly clenched eyelids she could hear him coming closer. 10 steps! 5 steps!! 2 steps!!!

“M … M … Mr Bungalow,” came the petrified reply as she was forced to peep just in case he was doing something else untoward. Ugh! He had reached the bottom step. He was right in front of her. UGH!!! And then, unable to keep eyes shut, she was looking straight up. “As your social worker,” she continued. “I really must … um … remind you once again that… that slathering yourself with impacted frog carcasses is n… not an acceptable way of receiving guests.”

“Mmm? The alluring jungle scent excites my dear Senator, yes?” Uncle Bungalow strode towards the kitchen, naked and trailing green goo. “Perhaps she should envelop some tea to calm her screaming libido?” he suggested helpfully.

Momentarily off guard and clawing at any sprig of sanity, the reply came back as part sigh, part cry. “T… Tea? Why, yes please. That would be …” Her bottom lip began to dance an anticipatory quiver. “…lovely.”