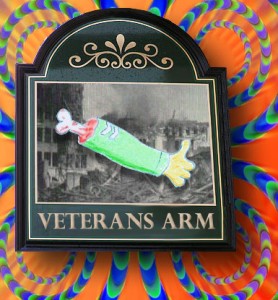 The Veterans Arm, with its distinctive severed-limb pub sign, was one of Uncle Bungalow’s favourite haunts.
Within its crumbling walls, one could find like minded folk, several beers you could shake a stick at, but best of all, it was where you felt at home, welcomed, nay, even loved.
“Oh my gawd, look wot the cat dragged in!”
“Bungalow, you Muppet! What the bleedin’ ‘ell are you wearing?”
“Yeah, clear off ya nut job old fart!”
Basking in the admiration of his contemporaries, Uncle Bungalow strode for the bar.
Dressing up was a serious undertaking and his getup today had taken a fair bit of doodle-doing.
Business suits and rubber boots, paisley shirts and mini-skirts, great top hats and tonnes of tat – that’s what the spare bedroom back at Bungalow Heights was made of. Plus enough accessories to make the most pimped of lobsters blush.
And so it was that from black and white minstrel face paint to Elizabethan prostitute’s costume, the effect was truly spectacular. Not unlike an albino panda version of Little Bo Peep with a fish-net fetish, even with the curly moustache.
Several attempts to mount a beer stained bar stool later and with a serene pfffft, Uncle Bungalow managed to sit down, his enormously oversized backside deflating alarmingly. Unabashed, he was still adjusting fine leather corsetry when the barman caught his eye.
“The usual, Mr Thirst Burster. One Festering Flamingo please.”
Uncle Bungalow fished a tiny mirror from his hand-bag while the grumbling barkeep fixed his cocktail.
Of course, he reflected, ignoring the small terrier that had mistaken his ankle as a urinal. Of course, few folk observed ‘International Fancy Dress, Frolic and Fun Day’ nowadays. That was why it remained so vital to remind his contemporaries of such great and noble traditions. Nobody seemed to have FUN any more.
The barman slammed a cocktail on the bar, bright red liquid slopping over the sides.
“Look, just drink up granddad, we’ve got the Nazi Pride lot on the way an’ I reckon they won’t appreciate your… ahem… dress sense. I mean… it’s like you’re just looking for … I mean… really… ” He seemed lost for a second before his face paled. “Oh gawds!”
“SIEG HEIL!!!” came a shout as the doors burst open. Clomping forth was a troupe of skin-heads, heavily booted and heavily boozed and each with one arm hoisted as if warding off some bright light. They were also all, to a man, not to put too fine a point on it, a little, shall we say, large.
Uncle Bungalow’s monochrome face split into such a manic grin he practically pooped his stool. Here were folk whose collective recollection had accountably neglected to forget the moral obligation engendered by this day’s prestigious occasion. In point of fact, here were some likewise oriented lads dressing up for the merriment of one and all. In other words, what he had here were some boys that actually knew about ‘International Fancy Dress, Frolic and Fun Day’! Oh salubrious celebrations! Oh concomitant commemorations! Oh Joy of joys! Oh…
“Oh, welcome to party time, my meaty mateys!” he bellowed by way of greeting his new chums. “Do you like my period costume? It’s rather loose in the behind. Mayhaps my rump requires a proper stuffing rather than a mere inflation of latex.”
Stony glares met his overjoyed expression. They hadn’t understood. Maybe he was looking too normal today. They probably thought he always dressed like a Racially-Indifferent Elizabethan Whore. Some of them seemed to have steam coming from their ears.
And so, accidentally knocking his overly pink drink down the jeans of the first scowling ruffian, Uncle Bungalow threw his arms open wide and roared “FELLOW FUN BOYS!!!”
The next four months, Uncle Bungalow spent in hospital, mostly dribbling.