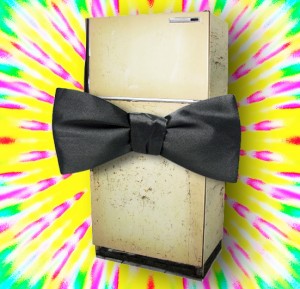 The refrigerator was all a-quiver, clearly nervous. Hardly surprising really, in a few short minutes the guests would arrive and then, well…
Uncle Bungalow squinted down his little list.
Mood lighting, check; seven fresh carrots stood proud in the gleaming new silver candelabrum.
Drinks, check; the mini-bar was stocked to overflowing. Even now, next doors dog was lapping up the spillings.
Suit, check; his honoured visitors would be all gussied up, in full feather – dressed to the nines in simple point of fact. It simply wouldn’t do to let his own side down, so he’d finally, after an exhaustive search, located a tuxedo that would stretch to fit a fridge – complete with fantastically outsized bow-tie.
The only slight problem in the end had proven to be the grand piano.
Having forked out on the tux, the candelabrum, the carrots and the drinks, the only halfway bombastic tinky-tonk to fit the budget now sounded more like a xylophone with smokers cough.
No. In the end, Uncle Bungalow had taken an executive decision and chosen what his gnarled and festering mind believed to be the standardized and popular alternative to the piano – a drum kit made of live cats.
So now it was time. The doorbell rang, as it did, and Uncle Bungalow conceded that it had a point. His stomach-chicken fluffed anxious feathers. Of course, it too was somewhat… ah… flustered. Never before had his meagre Croydon home played host to such an extravaganza.
Mind you…
It was all very well inviting the ambassadors of 17 countries for a masterpiece piano recital, but what if something fell foul? He could tell the fridge had at least some musical talent but to be honest, so far, in a low and monotonous tone, he’d only ever heard it hum.
Ah well, he mused, fumbling with the door latch by the eerie flashing blue lights infiltrating the hallway. If all else failed, he’d just have to wow them with the crazed but stunning “Wandering Gonad Dance”.